It is already clear that artificially intelligent systems are finding their way into almost all sectors of the economy. As a result, many professions are already facing radical changes, including those that one thinks are least affected: auditors, lawyers or doctors. At the beginning of the discussion on the consequences of digitalisation, the focus was particularly on simple, repetitive works. Activities with a high level of routine will in future be taken over by computers or machines, according to the basic tenor of the experts. For example, simple administrative tasks in companies or assembly line work in production. Mentally demanding work, on the other hand, will be the exclusive preserve of man in the foreseeable future, it has always been said. At the latest since the success of artificial intelligence in concrete applications, it has become clear that the range of applications for machines is much wider. For in many cases they are simply more precise and efficient than the human mind. For this reason, the higher-qualified white collar professions are increasingly being targeted by digitalisation. Source: faz.net

To answer the question raised in the heading: No. Because Text Robots in their current form and expression are as dumb as a post. Only when the software behind the Text Robot is programmed with typesetting frameworks, rules and the appropriate structured data can it produce text automatically.

You see: The term robot journalism, which is often quoted here, is misleading. Automatic writing has little or nothing to do with journalism. One could rather speak of data journalism in this context. However, it must not be ignored that the set of rules conveyed to the Text Robot is becoming increasingly better and more powerful. Soon we will talk about artificial intelligence here too.

These will be in such high quality, however, that they do not have to fear comparison with articles written by editors, journalists or copywriters. On the contrary: Automatically produced text even scores better in terms of credibility and professional competence than those written by human hands. This was the result of a study conducted at the Ludwig-Maximilians-University in Munich under the direction of Dr. Mario Haim. The result is not surprising.

For unlike a human writer, the machine knows no fatigue, no loss of concentration. Any editor who has ever had to write 20 product announcements or stock market news in a row, or 40 knitted waistcoats as a copywriter, knows what we are talking about. The quality of the text decreases – in the long run, man cannot deliver this draining work in constant quality. The Text Robot on the other hand delivers 500,000 product announcements in always the same quality. And all of this in one hour.

Using the digitalisation and automation of journalism to your advantage

And this also makes clear what Text Robots can do better than any journalist, editor or copywriter: Automatically turning data into text in high quality, based on a set of rules – into unique copies, mind you; no two texts are alike. Is this Robot Journalism? Of course not. It is obvious, however, that Text Robots can perform tasks – such as the complete equipment of all products in a web shop with text – more efficiently and thus much more economically. Other typical areas of application are, for example:

In the field of ecommerce:

In the publishing sector:

In the field of functional text: 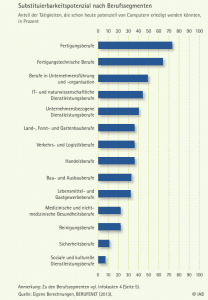 For journalists, editors and also copywriters, this means that the Text Robot is a helpful relief for recurring, sometimes even draining, writing work. In return, there is more time for those tasks that require journalistic, editorial and textual competence.

Journalists and editors can devote more time to research, background stories or interviews and no longer have to carry the weight of news writing. And copywriters can concentrate on letting their colleagues, the Text Robots, create ever better text.